skip to main | skip to sidebar

Posted by Elena Malec at 1:35 PM No comments: 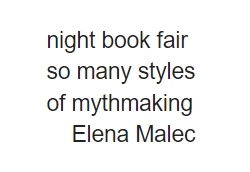 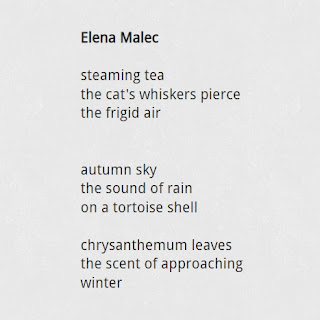 The Bamboo Hut
Posted by Elena Malec at 1:11 PM No comments:

I saw only a pile of books, a watering can and two white geraniums, writing brushes and paint brushes, coloured pencils, bottles of nail polish, curled apple peels  and the white of the walls; no picture, no painting, he took ladybugs out of a suitcase and pinned them in her white bridal veil in which her naked body was wrapped; the wedding bed was missing, maybe it was too early to sleep, he was watching her draw a bird without wings, only flying high in a fuchsia-coloured sky, she with the brush in the air bemused. Then she leaned over him, down on the immaculate wall grew blank verse following a writing brush that devoured the lime from the walls, climbing to the ceiling her drawings with birds and gazelles or just multi-coloured stars in clusters; when they stopped writing verses and drawing, they laid back  with a book in their hands, in the room there was a smell of Jonathan apples coming from a box between the books, time did not measure with a pendulum, but climbed the white walls in verses and colour, he fell asleep with his hands on the bird painted by her with its beak bent to suck dew, she kissed his unspoken poems only with the eyes of a metallic green or blue, no shell could have reflected so many pearly glitters as her eyes, a wild voluptuousness, lifted her higher and higher on the walls now half-covered with the desires that became one; when the sour juice of the Jonathan apples ran around the corner of their mouths, they let the brushes rest and sank into the books; the painted walls had cracks of dazzling light emanating from the verses and the multi-coloured stars filling the ceiling with wingless birds, only high flight and the ladybugs in her veil stretched the elytra in unison, the calligraphy dripping on the veil, it floated in the light and like champagne spilled over the rim of the glass, the walls collapsed into them and were suddenly free.

a green branch sprouted from my chest, rose to the sky in abundance of small branches, children and adults looked at me in amazement, the light slipped through the leaves and buds, in spring I was dazed by the hum of bees, in autumn there were reddish berries, round as rosehips. which were picked up by passers-by, hurried to fulfill their good wishes with them, over the summer birds came to sunbathe, flutter their wings, trills, restlessness saw my eyes and delighted my hearing, until exhaustion and sap rose from its veins to the branches so that the winter did not have the power to defeat the green, I did not know where the frosted sparrows came from to warm up a bit, I did not have money for grains and I recited verses from memory, sometimes I drew a sun on each branch one morning I woke up with a handful of stars in the higher branches, I walked through the cities and people always greeted me with a real smile, I had started looking for its roots for some time, I fell asleep with my eyes on the handful of stars in the sky and when I kneaded the homemade bread I thought about it, I hadn't found the roots anywhere on earth, only if I touched that spot on my chest I knew it must have come from longing or maybe from a dream.

brass bell
Posted by Elena Malec at 10:38 AM No comments: 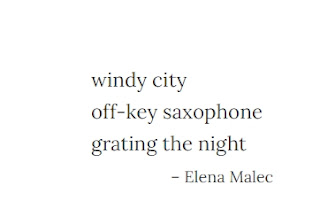 Tsuri-doro
Posted by Elena Malec at 5:47 PM No comments: